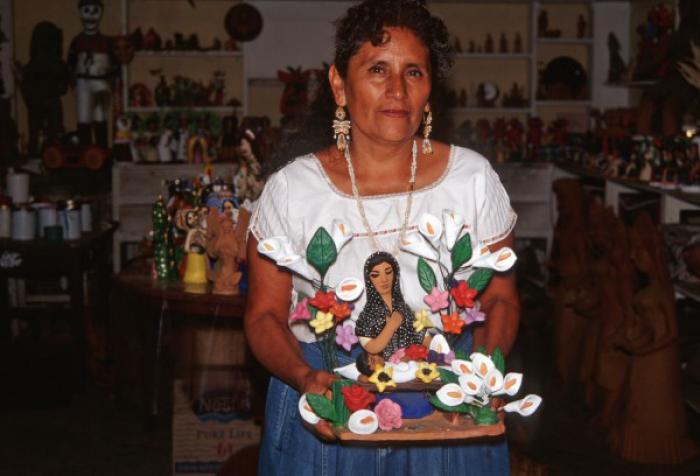 Irene is part of the Aguilar family of Ocotlán de Morelos, a rural town in the state of Oaxaca, Mexico. The Aguilar family is known for its ceramic art. Like her sisters, Irene began learning to make ceramic figures from her mom at a young age. Irene considers herself a perfectionist and initially took longer than her sister Guillermina to create new pieces. However, her work caught the attention of the Nuevo Mexico gallery, which ordered 120 pieces to mount and exhibition.

Irene is known for creating scenes of the traditions and customs of the villages and towns of her region in Mexico. However she also creates solitary female figures, which have made her known in the United States, principally of Frida Kahlo, women with calla lilies, musicians, devils, monks, prostitutes, Catrinas and mother earth images covered in foliage. Another of her important pieces is called a “fuente del amor” (lit. fountain of love). These began as fruit holders with birds and flowers and one day she added human images. The piece eventually morphed into a decorative piece on its own. Irene has participated in various exhibitions in various places in the United States such as Chicago, Houston, Arizona, Colorado, Dallas and New Mexico. Her work has also been exhibited in other countries such as Colombia and Canada.