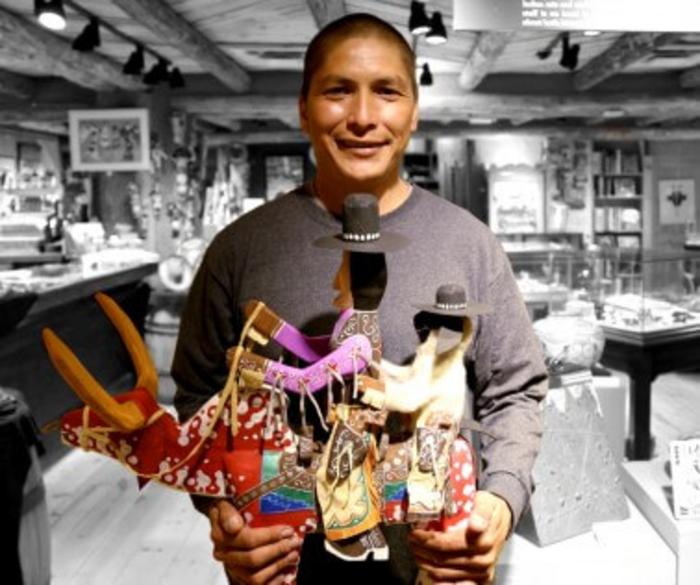 Delbert got a young start as a folk artist. He began making sculpture from found objects at age twelve and was represented in a gallery by the time he was fourteen. It was in 1988 that Delbert’s father Wilford Buck introduced his son to trader Jack Beasley, of the Four Corners area. With his father handling the boy’s art business, Delbert says he didn’t even know the value of money until he was in in his teens.

He assembles constructions from found objects and cottonwood limbs, then roughly carves and paints them. His first carvings were the toy guns and the small wooden horses he and his brothers used to make. His inspirations are many.

First there were the comic books that encouraged him to think it possible for a sheep to drive a car. As he aged, he drew on personal experiences, such as his rodeo bull riding, the colorful chaps he wore in rodeos, and his trips in a single engine airplane, to inspire his sculpture.

Delbert’s art is humorous and even satiric. His cowgirls and cowboys ride be-speckled skunks, buffaloes, propeller planes, rocking horses, or giraffes, with a goat in chaps and hat, or maybe a monkey or dog, riding behind. A wagon filled with pigs, Dalmatians, or chickens is pulled by a booted pig or an oxen-sized dog. It might take Delbert three to four weeks to complete one of his larger pieces.

All of his carving is by hand. He uses acrylic paint and a wide variety of found materials. Paper, fabric, yarn, ans wool all find their way into his work. He even sews the clothing on his figures, as taught by his mother. After some experience packing his own work and realizing the fragility of the sculptures, he has begun to experiment with a flexible rubberized material for feathers, instead of the more breakable wood.